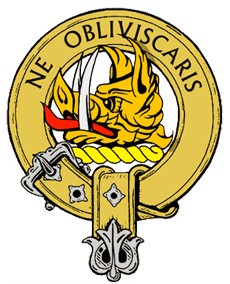 CLAN SLOGAN „CRUACHAN“ (Pron. Croo a hn) From the hosting ground accross Loch Awe, overlooking the original lands of the Campbells in Argyll. (Slogan is the Gaelic for war, or battle cry)

CLAN MARCH THE CAMPBELLS ARE COMING! , also known under a variety of names, including, in the Gaelic, Baile Inneraora
(The Town of Inveraray)

CREST BADGE The Chief’s full heraldic achievement includes as a crest, a „Boar’s Head, erased,“ or torn from its shoulders. This Boar’s Head, when shown on the wreath of twisted threads that bound the „mantling,“ or cloth protection on the back of the helmet, may be worn by Clansmen and followers of MacCailein Mor, within a buckled strap on which is displayed the Chief’s motto, „Ne Obliviscaris,“ Latin for „Forget Not.“ All members of Clan Campbell may wear this badge. Clansmen of the younger Campbell houses may wear the following: Loudoun – a Double Headed Eagle with motto, „I Bide My Time“; Breadalbane – a Boar’s Head, erased with motto, „Follow Me“; Cawdor – a Crowned Swan with motto, „Be Mindful“;

NAME ORIGIN From the Gaelic, CAIM BEUL, meaning wry, or curved mouth, the nickname of Sir Colin Campbell’s grandfather. Other versions of the name are erroneous, but can be found in current publications. The original spelling in English was Cambel. Why it was changed is not known for certain, but one theory is that the P was inserted to imply that the B should be pronounced softly, as it is in the Gaelic.

CLAN NAME In English, the clan is known as „Clan Diarmid,“ from the alleged descent from the Ossianic hero of that name. In the Gaelic, the Campbells are known collectively as the „O’Duibne.“ (Pron. Oh DOON yea)